The eResearch group at UTS is collaborating with Humanities and Social Science (HASS) researchers to create sustainable, engaging services for preserving and using various data, first making sure that data is well-described and stored using standards, then looking to build interactive services that allow people to use the data.

We have already been able to demonstrate the power of the shared Arkisto under-pinnings. Because data are described in a common format it is possible to very cheaply and easily build a basic website for a dataset, import it into a search and discovery portal and be confident that the data can be archived for later re-use without having to do major data migrations at the end of a project.

Additionally, when a new tool such as a visualisation widget is created for one project it can readily be re-used in others. For example, as part of the TLCMap project (Time Layered Cultural Map) the Criminal Characters project now includes spatio-temporal mapping features. Thanks to the use of the RO-Crate standard, these will be able to be directly transferred to the Expert Nation data.

Status: In development - to be deployed Q3 2020 - see the Expert Nation preview site.

Our histories of the First World War often focus on those who died. This project follows those who survived as they pursued their careers in the 1920s and 30s. It presents an alternate account of the importance of WWI to Australian nation-building, one founded not on the battlefield of Gallipoli, but in the expansion and professionalization of expertise.

Expert Nation data was developed in Heurist. The UTS eResearch team has been asked to take a snapshot archive of the current state of the data to provide a stable reference point for publications. 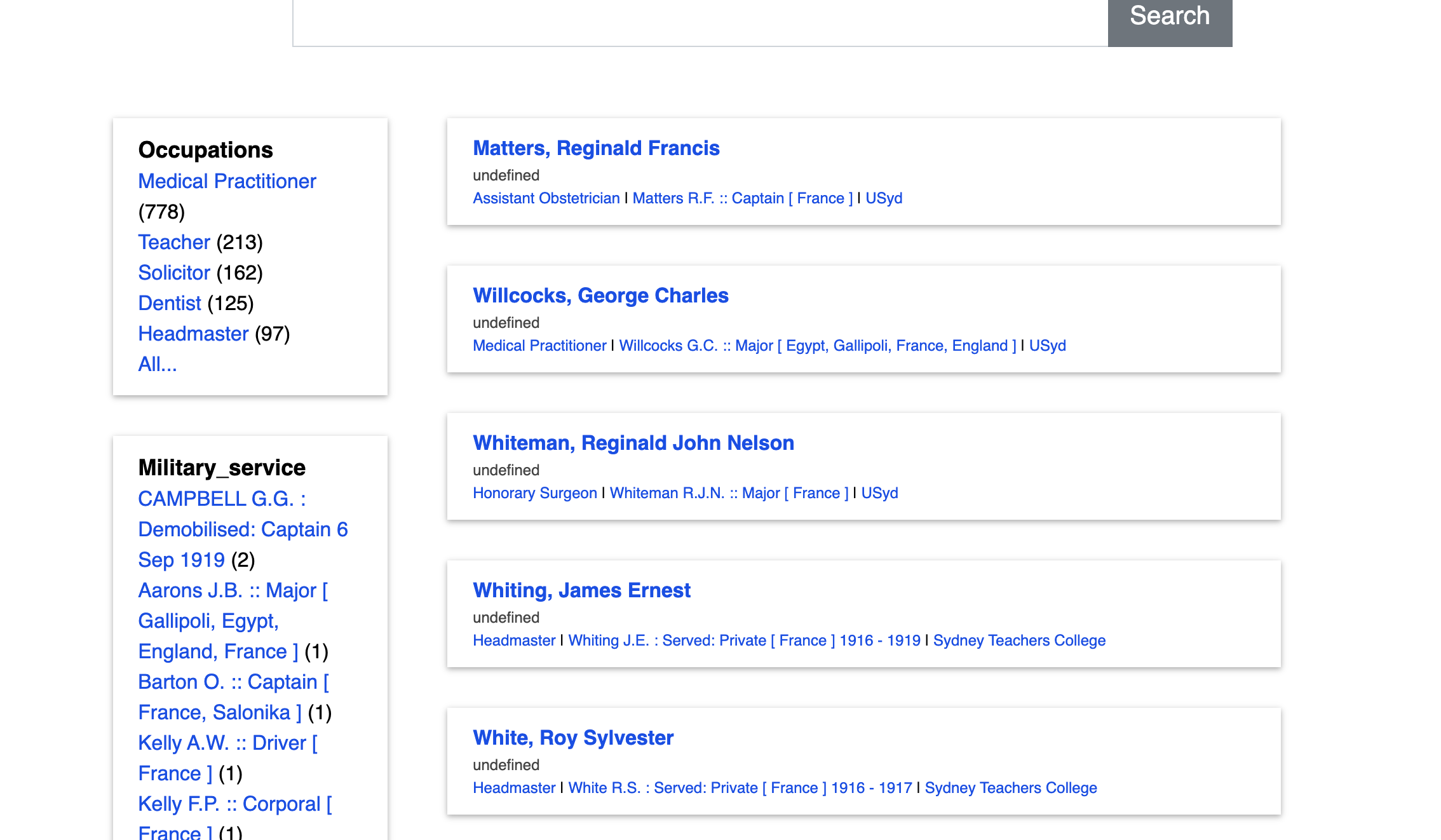 A screenshot of the Expert Nation data loaded into the Oni portal for data discovery
Expert Nation data has been converted to JSON-LD, a standard linked-data format that is the basis for the RO-Crate data packaging standard. The entire database was converted from ~100Mb of XML to ~50Mb of JSON-LD. See the tools page for more detail on the conversion and similar repository export use-cases.

Criminal Characters led by Dr Alana Jane Piper is a research project investigating the criminal careers and life histories of Australian offenders from the end of the convict period through to the Second World War.

Crime has been central in shaping the history and society of Australia. This research project aims to transform understandings of criminal offending by capturing the first large-scale data on the life histories and offending patterns of Australian criminals across a period extending from the end of the convict era to the beginning of the Second World War.

The creation of this dataset will bridge gaps between historical knowledge of crime and contemporary criminological research by providing insights into the contexts and patterns of offending across a period that saw significant legal and social developments, including mass migrations, changing technologies, war, economic depressions, the emergence of the narcotics traffic, and the evolution of new forms of punishment. By revealing untold stories about the lives of people who committed crimes in Australia across time, this project will make a significant contribution to the fields of history, criminology and law, as well as the work of family and local historians.

How did the changing social, political and economic landscapes of the late nineteenth and early twentieth century affect individual involvement in criminal offending? Are the people revealed by the records the sorts of characters that the public expect? Or will there be surprises?

In short, who committed offences, and why? This project will investigate these questions by enabling members of the public alongside researchers to transcribe the records of tens of thousands of persons imprisoned from the 1850s through to 1940.

Dr Piper's data has been:

The migration to RO-Crate means that the data can be displayed using RO-Crate's standard HTML viewer. That is, a basic website becomes available "for free" just by using the RO-Crate standard.

Coming soon to Criminal Characters: Interactive maps with time-slider control to track mobility of people and institutions and visualise the development of the court system. 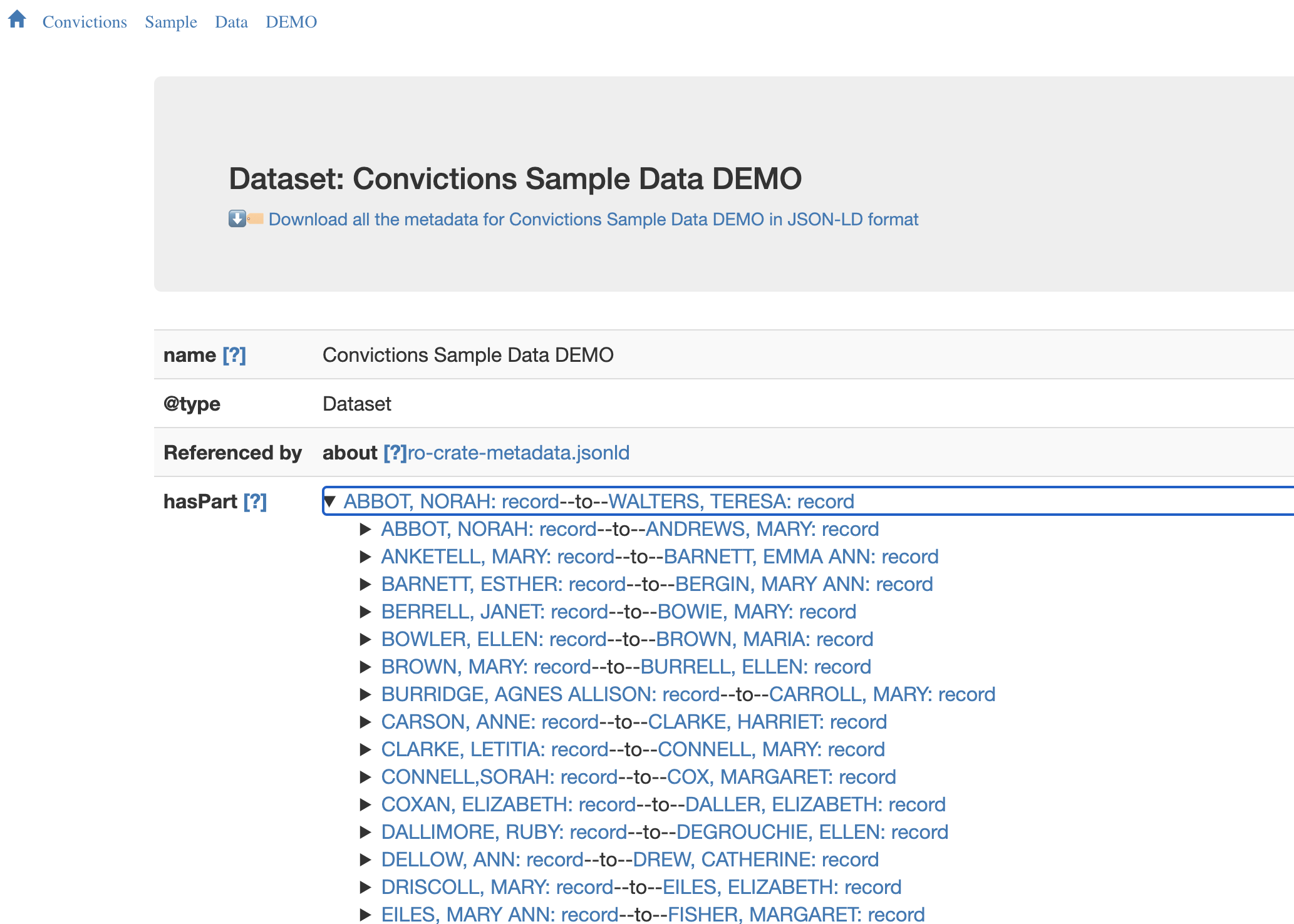 A screenshot of Criminal Characters data in the default RO-Crate HTML viewer
ExpertNation data has been converted to JSON-LD, a standard linked-data format that is the basis for the RO-Crate data packaging standard. The entire database was converted from ~100Mb of XML to ~50Mb of JSON-LD. See the tools page.